The old town of Plovdiv

This fascinating tour will bring you to an unspoiled and little-known area of the South Balkans, where we will walk amongst pristine mountains, enjoy superb local wines, delicious home-made dishes and witness the incredible changes the country is currently undergoing. During the trip we will see Roman and Byzantine ruins, active Orthodox monasteries, churches and traditional Balkan architecture from the 18th–19th c.

We will start from Bulgaria’s capital, the city of Sofia. Sofia has a beautiful city centre whose many late 19th and early 20th century buildings have recently been restored. We will make a city tour and visit the famous Boyana church, which is considered one of Bulgaria’s most significant cultural treasures and is included in UNESCO’s World Cultural Heritage List.

Our next stop is Melnik – a picturesque town in south-western Bulgaria, in the middle of the most popular vine-growing region in Bulgaria, famous for its local Broad-leaved Melnik vineyards and wines. While we are in the region we will explore the surroundings of the town of Melnik and Rozhen Monastery, one of the ancient monasteries preserved in Bulgaria, and taste the wines of Damyanitsa winery.

Another highlight of the tour is the Rhodope Mountains – the home of Orpheus and Dionysus. It is a mountain of myth and wonder, where spectacular scenery and rural idyll go hand in hand. There we will be exploring the Trigrad gorge for Wallcreepers and other rare birds, inhabiting the cliffs and the river gorge and will visit one of the most spectacular caves in Bulgaria, The Devil’s Throat.

Leaving the mountain we will stop at its foot and visit the Assenova Fortress – a Medieval fortification with a church overlooking the town of Assenovgrad, and the Chaya river valley with very beautiful and well preserved murals.

On one of the next days we will visit the nearby nature reserve and in the evening we will taste the fine wines of a local winery. We will spend a day sight-seeing in the old town of Plovdiv, where will walk along the cobbled streets, visit Orthodox churches, ethnographic and art museums and the ancient Roman theater.

Then we will head north to Veliko Turnovo via Shipka Pass and Etara Ethnographic complex; on the way we can stop at the town of Kazanluk and visit another UNESCO World Heritage Site – the Thracian tomb of Kazanluk – an exquisite example of ancient art and painting, dated from the 5-th century BC. If you happen to come in May or June, you will be able to enjoy the rose plantations of the famous Bulgarian Rose Valley, which we will be crossing. In Veliko Turnovo we will visit the medieval Tsarevets Fortress, explore the old part of the town and taste the wines of the winery of Lyaskovets.
Back in the region of Sofia we will explore the Vitosha Nature Park or take a day trip to the Rila Monastery (UNESCO site), the biggest monastic complex on the Balkans, dated from the 10th c.

On this tour we will visit sites ranging from the lowlands of The Thracian Plain, which hold a vast assemblage of birds like Eastern Imperial Eagle, Lesser Spotted Eagle, Stone Curlew, Rose-colored Starling, Lesser Grey Shrike, Isabelline Wheatear, Black-headed Bunting and the Souslik, to the pine-scented slopes of the southwestern mountains, where a magnificent array of raptors – Short-toed Eagle, Booted Eagle, Long-legged Buzzard, Levant Sparrowhawk – are possible. The rugged hillsides and oak woodlands offer exciting possibilities for Common Rock Sparrow, Somber Tit, Black-eared Wheatear (ssp. melanoleuca), Black-headed Bunting, Ortolan Bunting and Cirl Bunting, a delightful set of shrikes (Red-backed, Lesser Gray, Woodchat and Masked). This is a corner of Europe, where Red-rumped Swallows swoop through the streets and White Storks nest on church domes, along with their attendant «basement» neighbors, Spanish Sparrows. 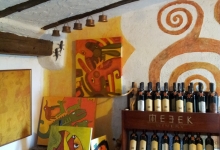 City tour of Sofia and transfer to Melnik

Drive to the Trigrad area

Trigrad gorge and drive to Assenovgrad

Assenovgrad and surroundings; sight-seeing in Plovdiv

Drive to Veliko Turnovo via the Rose Valley